Your Coffin or Mine? - Vampire Book Review 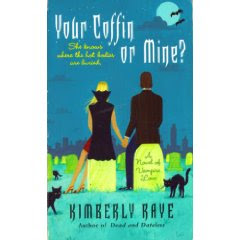 Your Coffin or Mine?: A Novel of Vampire Love (Dead End Dating, Book 3)

In many ways, Lil Marchette is the typical New York City career woman: single, sophisticated, scrambling to make a living. She loves shopping and Jell-O shots, and she'd rather take a bullet than sully her Jimmy Choos (literally). She runs a popular dating service, and she has decided to boost business by applying to appear on Manhattan's Most Wanted, a local version of The Bachelor that will pair one lucky gal with a blow-dried television weatherman.

It's not that Lil has eyes for the forecast prognosticator; it's just that she figures there is no better place to find the desperate and dateless than on a television dating contest. She'll hand out a few business cards, then wait for the calls to flood in. But things become complicated when she is actually selected for the program, then makes it through several rounds to the semifinals. What if she ends up being selected? This guy is definitely not Lil's type.

You see, Lil is a vampire. A "born vamp," she continually reminds us, not to be confused with the lowly "made vamps" whose powers and status are not up to snuff. Her patrician and very old family, of European origin, runs a thriving office supply and copying business. Her parents expect her to join her siblings in helping run the business, but Lil can summon no interest in the family enterprise—hence the genesis of Dead End Dating, Lil's steadily strengthening start-up. Lil's parents have little patience for her independent pursuits and wish she would just settle down with another born vampire and "squeeze out some baby vamps."

The pressure is mounting now that her brother Jack is getting hitched—though his chosen sweetheart, a human named Mandy, is persona non grata on the Marchette estate. Such a mixed marriage is decidedly undesirable to born vampires like the Marchettes, and Lil's mother spends half of the book trying to break up Jack's romance with Mandy and the other half hectoring Lil about pairing off with an eligible suitor.

Too bad, then, that the only vampire Lil can't take her mind off is "made vamp" Ty Bonner, a bounty hunter by trade, who shared one magical and memorable night with Lil before the two came to their senses and parted. Ty is definitely not what Lil's parents would consider "eligible," nor — due to his made-vampire status — would Lil and he be able to reproduce. No, a marriage to Ty would definitely not do. Why, then, can't Lil stop thinking about him? And why does she have an overwhelming sense that he is in terrible pain and danger? Ty's ransacked apartment bears out Lil's worst fears. There she meets the fascinating detective, Ash (more of him, please!), who is hot on the trail of Ty's abductor.

Lil has little choice but to leave the investigating to the pros while she tries to carry on with her life, juggling the preparations for Jack and Mandy's wedding, her appearances on Manhattan's Most Wanted, and her burgeoning business. Before long, though, her sense that Ty is in real trouble overwhelms all else. Can the flashes she is picking up from him psychically help her locate him in time?

Raye has written a sassy, fast-paced read that should appeal to fans of paranormal romance and urban fantasy. Lil narrates in an ultra-modern, highly conversational voice that will ring familiar with anyone who has spent time with young urban professionals. Brash and self-confident on the surface, Lil frequently lets slip glimpses of the insecurity lurking just beneath. She is just sure enough of herself to reject her parents' lifestyle, but she isn't quite convinced yet that she's done the right thing, nor that she's going to be able to see it through. Readers will have to pick up the next book in the series to see where Lil's choices take her next.

Your Coffin or Mine?: A Novel of Vampire Love (Dead End Dating, Book 3)

I am a big fan of this series. This is one that I think slips under the radar. It is funny, sexy and full of paranormal goodness. Great review

Haven't read this series yet, but it sounds fun. Will definitely check it out. Thanks!

Hi, elnice...I agree, it's strange that this series doesn't get more attention. It seems to be one that would have wide appeal in today's market. Thanks so much for commenting!

Hi, Alexia. I think you'll enjoy this series. "Fun" is a great word to describe it. Thanks so much for commenting!

I read A Stanger's Kiss from this author and really enjoyed her writing style. This series in new to me from her pen and going by your review it sounds like a wonderful read :D

I haven't read A Stranger's Kiss--what was it like? I hope you get to read this one!

What I remember mostly is the combination of interesting characters with a passion and suspenseful plot. I read it in a day or two and wanted desperately to read A Stanger's Desire but by that time it was already OOP. I was gathering as many authors in those days as my CC could afford. Somehow Kimberly Raye disappeared from my radar as I was so focussed on the second book in this duology, I didn't search any further :S

Dead End Dating series probably has a different vibe but I know that I really liked the writing style of Raye and these books sound like some fun filled reads ;)

I think reading is THE best way to learn another language. That's definitely how I learned Spanish! I do think you would enjoy the Dead End Dating series--let me know if you get to check any of them out. Thanks so much for getting in touch!