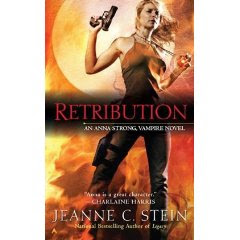 In Ann Strong's most recent adventure she must use all of her intelligence and vampire strength to save her friend, the mysterious shapeshifter Culebra. Once before he and Anna had encountered the black witch Belinda Burke. Only her death would stop her path of merciless destruction. Without telling Anna, Culebra decides to track down Belinda and confront her on his own.

He never had a chance of course, but she doesn't kill him. For Belinda it's more fun to play with him and with those around him, like Anna and David Frey, a werewolf whose deep knowledge of magic could be the witch's undoing.

Anna is also forced to deal with her former mentor Williams, a powerful, older vampire who over a short period of time has become her adversary. The hatred between the two is palpable. Still he needs her help in investigating the deaths of several young, newly turned vampires. All are found with the blood drained from their bodies.

Anna Strong is aptly named. She has not only  super strength of body but also of her mind. She is continually alert to the vampire within and works to keep it in check and her humanity front and center. Thus her love of family and friends (supernatural or otherwise) is paramount. Anna's courage is unquestioned but that coupled with a strong independent streak sometimes causes her to take chances which almost end in disaster.

As in the previous four novels smartly drawn characters, a well plotted tale and page turning adventure keep the reader wanting more.  Fortunately Jeannie Stein promises that Anna's story will continue in future books. I truly love this series. If I could choose a fictional character as a friend it would be Anna!

Posted by Patricia Altner at 12:50 AM

This is one of my favorite UF series and yeah, I won't mind Anna as one of my buddies. Especially if I needed backup for a dark alley.

Glad you like this series as well. You show excellent taste ;-)