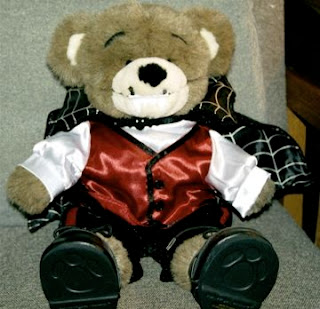 There have been some fantastic responses for the Favorite Vampire(s) contest.  If you haven't read the comments you are missing out on some interesting information. The knowledge of the vampire genre within PVN's readership amazes me.

Reader Tallesin has an excellent write up about a movie completely unfamiliar to me - Isle of the Dead (1945) starring Boris Karloff. The story is based on the vorvoloka - "a vampire/werewolf hybrid that hunts for blood."


TV series with vampire heroes: Kindred the Embraced - I loved it but it only lasted 2 seasons; Buffy, the Vampire Slayer naturally makes the list with Spike and Angel getting favorite vampire mention; Dark Shadows', an early TV series had the conflicted Barnabas Collins; the short-lived Moonlight series with the alluring Mick St. John; HBO's True Blood have macho vampires Bill and Eric...

Reader fandangogroovers chose Glittering Savages by Mark Burnell as her favorite vampire novel. I mention this because it is a title I had never heard of. According to Amazon it was published in 1995. I need to find a copy of this book.  Reader Dirgesinger mentions the novel I, Strahd by P. N Elrod, a very dark story that shows the early Elrod's talent for telling a riveting tale. She (Elrod) is the author of the Vampire Files series. Reader Alessandra names Claudia Gray's Evernight  as her favorite book series.
Naturally Bram Stoker's Dracula made the favorite novel list.


Obviously I have only skimmed the surface, and I appreciate hearing from every one of you. Don't be concerned if someone else has mentioned your favorite(s), or if you've thought of something else you want to share. Please comment away. I want to hear your thoughts.

BTW - This contest IS international!

Leave your comments at Favorite Vampire(s) contest.
Posted by Patricia Altner at 1:00 AM