Sunrise in the Garden of Love and Evil - Vampire Book Review 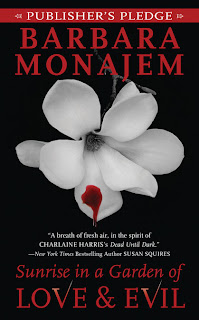 Sunrise in the Garden of Love and Evil

Sunrise in the Garden of Love and Evil

is a frolic in a zany town catering to vampire seeking tourists This small Louisiana township is not far from New Orleans, Anne Rice territory. As it turns out vampires do exist here, but for the most part keep it secret from normals. In Monajen's world a vampire is someone born with a rare gene, but the vampire lust for blood and sex doesn't become apparent until puberty when it sets in with a vengeance. We witness teenage Zelda, Ophela Beliveau opinionated niece, as she goes through extraordinary growing pains.

Ophelia also has the rare genetic anomaly. Having sworn of sex she must get her needed blood supply from very rare meat.  She wants a relationship that is meaningful; unfortunately her last experience was extremely painful. The man she adored was repulsed by her fangs which appear whenever she becomes aroused. Her efforts to hide them were in vain. What a dilemma!

Into this picture enters Gideon O'Toole an extraordinarily good looking police detective who shows up at Ophelia's place because someone, a nasty neighbor she suspects, has destroyed her garden. As the owner of her own landscaping business this kind of vandalism infuriates her. The sizzling chemistry between Gideon and Ophelia is obvious and immediate.  Ophelia is not only beautiful but she sends out high intensity sexual vibes, since she hasn't had any, so to speak, for quite some time. Ophelia however, keeps her feelings in check. She absolutely will not let herself get close to Gideon believing he would also reject her when the fangs come out.

What everyone thought at first was simple vandalism turns out to be part of a nasty campaign against Ophelia. This includes blackmail, murder and false accusations of child pornography. Things gets nasty, but never graphic, and there is lots of comic relief.

The plot contains plenty of surprises and suspense, but it was the charming, offbeat characters that kept my attention throughout. Quite a fun book! I look forward to more adventures with this crew.

This is Book One in the Bayou Gavotte Series.

Read a guest blog by Barbara Monajem. [Contest portion is open until March 9, 2010]

[Dear FTC, this book was sent to me by the author and I loved it]