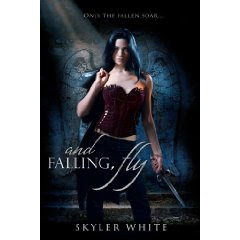 What is reality? Trying to ponder it could drive you crazy if you aren't there already.

Dominic is a neuroscientist with flash backs to lives led long ago. Reborns, like Dominic, are doomed to live life after life, eventually remembering all their reincarnated selves.  As a researcher into the workings of the human brain, he is convinced that it is his brain's chemistry causing his "seizures". They have nothing to do with God or damnation as he was led to believe. He has even developed a medication aimed at controlling certain memory centers in the brain. Now he stands committed to helping others, and that includes others who feel doomed to life as a vampire.

Olivia is a fallen angel and thus a vampire doomed to go through life tempting others with her beauty so that she can feed. Her perfect body feels neither pleasure nor pain of its own. For centuries she hoped to find a loophole from this terrible existence, but none has appeared. She despairs of ever finding a way out.

At a juncture in their lives both Dominic and Olivia return to Ireland and to an underground place called L'Otel Matillide also known as Hell, where each has found a form of sanctuary before although never at the same time, until now. Here the damned can feel free to be themselves rather than hide who they truly are when on the surface world.

Olivia and Dominic come to this place seeking  answers to their plight and in the process find a love each thought impossible.

And falling fly combines urban fantasy with a philosophical spin on reality. Not only are the ideas presented in a unique, powerful way but the author's poetic writing  draws you into her fantastic world and holds you tight.

Here is a quote from the scene when Dominic first enters L'Otel Matillide:
"He drew himself up to his full height, testing his own strength, closing his fists into hard rockets of compressed anger. Already nothing made sense. Corsets and hoop skirts swayed beside prowling latex and dog collars. There was nothing extreme or profane enough to elicit censure in this great hall of the damned."

Book 1 of the Harrowing Series.

Read an interview with Skyler White

[Dear FTC, this book was sent to me by the publisher]
Posted by Patricia Altner at 12:50 AM

Ooh good quote pick. This is one that I'm thinking of getting!

There were so many beautiful passages it was difficult to pick one.

Hope you enjoy the book!