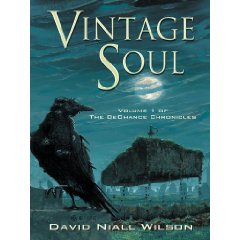 From the publisher: When a gorgeous, three hundred year old vampire is kidnapped from her lover’s top floor, high-security suite, the city’s underground community is shaken.

The abduction seems impossible, and when things seem impossible, there is only one man in the dark, underground society of San Valencez, California who can be trusted to unravel them. Donovan DeChance is a collector of ancient manuscripts and books, a practicing mage, and a private investigator.

Called in to investigate, he soon finds that there is much more to the case than a simple abduction. There will be no ransom, and if he doesn’t prevent an ancient, forbidden ritual from reaching its culmination, far more than a single vampire’s undead life will be at stake.

Donovan, his fiery, sometimes lover Amethyst, and a troop of supporting characters follow the ghostly trail of the kidnapper through a winding maze of intrigue, always a step behind, through magical battles, murders, and confrontations with a rogue band of young vampires intent on beating Donovan at his own game.

Vintage Soul is a dark, urban, supernatural mystery. Set in a fictional underground society, a city within a city, it opens portals to the unknown darkness that surrounds us. Fast-paced, strewn with clues, investigation, and magic, this is a book sure to slake the appetites of fans of mystery and the supernatural. Welcome to the darkness; welcome to the world of Donovan DeChance. Vintage Soul is Book I of the DeChance Chronicles.

PVN:  I read the back-of-the-book blurb for Vintage Soul

and wondered how I could improve upon something that so well summarizes the plot,  and the description of the main character, Donavon DeChance, bibliophile, and  practicing detective with wizardly powers. Unlike so many book blurbs this one does an excellent job. Still I'll press on with my own observations.

He also knows how to handle innumerable spells and charms making him one of the top investigators  of San Valencez, CA's underworld.  It's for this reason that the vampire council chooses him to find find the beautiful vampiress Vanessa before her kidnapper  has a chance to use her in as the sacrifice in an ancient, and dangerous ritual. Dominic does much of the sleuthing on his own but is aided by the lovely Amethyst who knows more about the powers of crystals, stones, and talismans than anyone else. Then there is his familiar a very clever cat named Cleo plus the recent addition of Asmodeus, a shabby but knowledgeable crow (his former human suffered a nasty demise) whom Cleo despises. Mages, demons, and other preternatural creatures prove worthy adversaries as well as friends for Donovan.

This clever urban fantasy is packed with solid writing and filled with crisp details. Wilson is a whiz at painting with words. Below is a description of a ritual gone very wrong when an inept practitioner fails to control the demon he has raised.

"The circle had become  white pillar stretching from floor to ceiling. It was impossible to see into the interior, and no sound escaped from within, but the air hummed with energy and then, with a shudder, the remnant of the circle blew asunder. Air and sound raced outward,  pounding the windows from the old cathedral outward and sending a shower of broken wood frame glass shards in a long arc, pummeling the street and homes beyond."

is Book One of The DeChance Chronicles.

Read the interview with David

[Dear FTC, I received this book the author. Thank you, David]
Posted by Patricia Altner at 1:00 AM

looking forward to this one!

Haglerat
I forgot to place a link to the interview & contest with David.

Hope you have a chance to stop by!