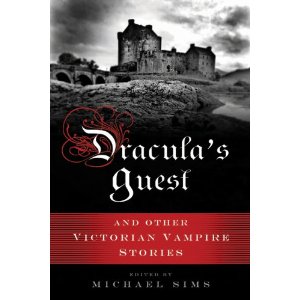 Michael Sims, the editor of this excellent collection, gathers stories of the undead from throughout Europe and written in what he loosely terms the Victorian era. Queen Victoria reigned from 1837 - 1901, but the range of these published tales is a bit wide of that mark.

Sims' entertaining introduction tells of themes and images that occur within this collection. These blood suckers were predators who could be turned away by Christian symbols, garlic, and little else. Do not expect sparkling  vampires or romantic heroes agonizing over their soulless state. As for Ann Rice's haughty Lestat, he wouldn't be caught dead with these creatures.

"In this book you will find memorably chilling moments such as these: a literal race  against death in which a man on horseback tries to escape from a terrifying child vampire and the rest of its family; a teenage girl's horrified realization of the nature of her adoring new friend; and a man who abandons his wife because he has brought her sister's corpse back to some semblance of life. If you think of the Victorians as waistcoated prudes with BBC accents, you're in for a shock."

For our ancestors living in earlier centuries there would be found a plenitude of corpses. Many graveyards gave up their dead because of overpopulation, too many bodies in a single grave, and a high water table. Bodies in all states of decay surfaced. No wonder the living were obsessed with the dead.

For high atmosphere nothing compares to writers of the nineteenth century. The anthology is arranged to show how vampire tales and myths evolved. The last story is Dracula's Guest by Bram Stoker and the first is They Opened the Graves.

The story selection has three divisions: The Roots; The Tree; The Fruit. Each story is prefaced by a brief literary biography of the author.

This sounds really interesting- It'd be cool to hae all these tales together.


This collection is definitely a keeper!

May I presume to say thank you for this, and for your Library Journal review? It's very nice to see so much information available to potential readers, especially including the contents. This way they can really decide if it appeals to them. And may I mention that DRACULA'S GUEST now has a Facebook page, as do I, should anyone want to become a fan of it? If this self-promotional comment is inappropriate, please just delete it. Thanks.

Your welcome, for both reviews. I only said what I truly believed. For me it is always a pleasure to introduce readers to good works that are published.

I'll checkout your Facebook page -PVN has one as well :)

Hi. Thanks. Yes, I became a fan of your page too. Thanks for getting all the info out.