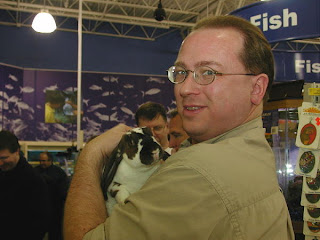 Today PVN welcomes author Scott M. Baker who discusses vampires and their slayers. He has written the novel The Vampire Hunters which will be published by Shadowfire Press in April, 2010.


Vampires vs Vampire Hunters
Of all the monsters that scare us, none have terrified the imagination as much as the vampire.  These creatures of the night embody our most inner fears.  The primitive fear of being preyed upon in the dark when we’re most vulnerable and of having our life slowly drained away.  The more modern fear of losing control over our own free will and of giving in to our basest desires.  And the spiritual fear of losing our souls.

So pervasive and disturbing are these fears that legends of the undead can be found in almost every culture stretching back thousands of years, whether it’s the strigoi of Romania, the chiang shih of China, the brahmaparusha of northern India, or any of the other various names they are known by throughout the world.  Over time, the legends became literature, and the supernatural aspects of the undead gave way to their entertainment value. Today, vampires appear more frequently in film and fiction than any other monster.

Almost as common as vampires are the men and women who hunt them.

The man-versus-monster theme made its first appearance in Dracula, the first of the modern-day vampire tales.  Bram Stoker told his story not from Dracula’s point of view but from those of van Helsing and the others who track down the count.  Universal Studios would forego the hunter, only bringing back van Helsing for a brief cameo in Dracula’s Daughter, and instead making the monster the recurring character of its sequels.  In the 1950s and 1970s, Hammer Studios took a different track, introducing Peter Cushing as van Helsing in Horror of Dracula and making the doctor the mainstay of their vampire movies, bringing him back to fight the undead for seven sequels.

Stoker’s vampire hunter is the most famous, but van Helsing is only the first among his profession.  Over the last twenty years we’ve watched the battle standard be taken up by Blade, Buffy Summers, Anita Blake, Harry Keogh, Jameson Arkeley, Vampire Hunter D, Jack Crow.  And now, even Abraham Lincoln. 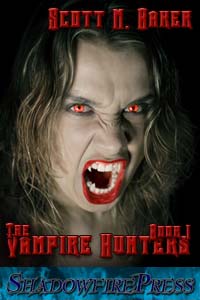 So why the fascination with vampire hunters?

Simply enough, the hunters are the good guys.  It doesn’t matter whether they are chosen ones, professionals, or simple men or women who realize the need to confront the undead.  When faced with the ultimate evil, they fight the good fight.  They go into combat outnumbered and outgunned.  They face death, or worse, being turned into a vampire themselves.  In the end, they defeat the undead.  In short, the hunters appeal to our sense of justice and righteousness, and they vindicate our belief that good will triumph over evil.

It’s why I chose vampire hunters as the theme upon which to base my vampire trilogy.

I’m an old monster kid who grew up enthralled by the Universal and Hammer monsters.  My first hero was Peter Cushing as van Helsing.  No matter how much vampire films changed over the years, with increased action and special effects, nothing can compare with Cushing sliding across a long dining hall table to tear the curtains off of a bay window and douse Dracula in sunlight.  It was that theme of a normal man going up against the undead that eventually compelled me to write The Vampire Hunters.

If Peter Cushing could save the buxomly damsel in distress (this was Hammer, after all) and defeat a nest of vampires by himself, then there were few things that I couldn’t face down.  Idealistic?  Yes.  But what type of writer isn’t idealistic?

And please drop by my blog at http://scottmbakerauthor.blogspot.com.

My first hero was Peter Cushing as van Helsing

I need to check out this book just for that phrase - I am a huge Cushing and Hammer Horror fan - Classics.

Thanks for the intro Patricia...

Also, you had great comments this weekend and as a plus I can now connect a voice to a person.

Howdy, EH. Glad to meet a fellow fan of Peter Cushing and Hammer. If you check out my book, let me know what you think. I'm definitely interested in the feedback.

Hello Vampire Queen... I have you an award here: http://haleymathiot.blogspot.com/2010/03/i-got-some-serious-awards.html