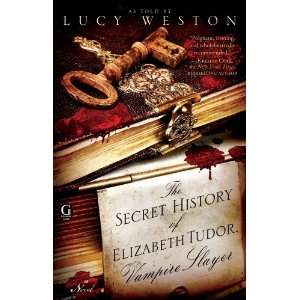 Revealed at last in this new vampire saga for the ages: the true, untold story of the “Virgin Queen” and her secret war against the Vampire King of England. . . .

On the eve of her coronation, Elizabeth Tudor is summoned to the tomb of her mother, Anne Boleyn, to learn the truth about her bloodline—and her destiny as a Slayer. Born to battle the bloodsucking fiends who ravage the night, and sworn to defend her beloved realm against all enemies, Elizabeth soon finds herself stalked by the most dangerous and seductive vampire of all.

He is Mordred, bastard son of King Arthur, who sold his soul to destroy his father. After centuries in hiding, he has arisen determined to claim the young Elizabeth as his Queen. Luring her into his world of eternal night, Mordred tempts Elizabeth with the promise of everlasting youth and beauty, and vows to protect her from all enemies. Together, they will rule over a golden age for vampires in which humans will exist only to be fed upon. Horrified by his intentions, Elizabeth embraces her powers as a Slayer even as she realizes that the greatest danger comes from her own secret desire to yield to Mordred . . . to bare her throat in ecstasy and allow the vampire king to drink deeply of her royal blood.

As told by Lucy Weston, the vampire prey immortalized in Bram Stoker’s Dracula, this spellbinding account will capture your heart and soul—forever.

In this alternate Tudor England Elizabeth I (daughter of Henry VIII and his second queen Ann Boleyn), one of England's greatest monarchs, has the added burden of being one of the chosen to fight the dark forces threatening her kingdom. Through her mother's line Elizabeth has inherited Morgaine's power as a vampire slayer. But things are not always as they seem. There are complexities and limitations that come with this inheritance. It's even possible that Mordred, king of the vampires, may not be as villainous as he first seems.

As for the writing of this tome, here is the conceit. In modern times, the vampire Lucy Weston (aka Lucy Westenra from Bram Stoker's Dracula) has acquired the secret diaries of QEI and has released them to the public. She feels her life is in danger because she has done this. In an "interview" with a representative of the publisher  she hints there may be more volumes that will be released if she "Lucy" survives. Sequels, in my opinion, would be quite welcome. The Elizabeth portrayed in this engaging story is spirited and resolute. She will always do what she believes is best for her country.

The author, whoever it may be, completely captures the atmosphere of the Tudor court, and the strength of the young Elizabeth who spent many of her years as a princess fearing assassination by traitorous plotters or execution by her sister Queen Mary. Secret History

is an engrossing tale with plenty of action, suspense, and  romance.

[BTW I received a copy of this book from the publisher. Thank you!]
Posted by Patricia Altner at 12:55 AM

Great Review,,I have 20 pages left to go.and I don't want to finish.But,alas,I will..I hope we are going to hear more from "Lucy Weston" we have a thread up on BarnesandNoble UF/Paranormal..We will be discussing The Secret History of Elizabeth Tudor Vampire Slayer..soon.Feel free to Join us Just waiting for some to finish the book so we are all on the same page Have a peak..HNY Susan. Our Moderator is PaulGoatAllen The Best..But we just take over..he is an Amazing Guy..

Thanks for letting me know about this discussion on B&N. I have looked it up and plan to join in. Are you VermontCozy?