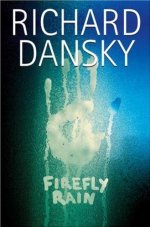 by Richard Dansky
Wizards of the Coast Discoveries (January 8, 2008)

Readers who seek a quick break from vampire fiction while still getting their paranormal fix would do well to check out Richard Dansky's creepy ghost story, Firefly Rain. Dansky sets this modern-day tale near a fictional town that time has left untouched, located in his native North Carolina; a distinct Southern Gothic sensibility thus pervades the novel. Our protagonist is Jacob Logan, a  young man who has left his rural roots behind to seek success in Boston. When a business venture founders, Jacob finds himself at a crossroads in his life and decides to visit his boyhood home to regroup. Jacob returns to his parents' empty house, which has stood unused on the Logan property since their deaths, intending to stay only a short time while he clears his mind and considers his options.

It isn't long before things start going awry. Jacob notices that the fireflies that are so plentiful everywhere else--"Fireflies are how angels find things when they come down from heaven," his mother had once told him--are nowhere to be found on the Logan land. Indeed, the firefly he captures off the property and brings back to the family spread dies at once. Jacob's belongings, shipped separately from Boston, never arrive, destroyed in a freak accident en route. Even odder, Jacob's car disappears from the driveway. The extreme isolation of the Logan homestead makes Jacob dependent for his every need on the ageless, unreadable but preternaturally loyal caretaker of the property, Carl Powell. When Jacob sees his missing car slowly pass the property in a driving rain, he gives chase, glimpsing a heavyset driver he can almost, almost identify. Distraught, Jacob collapses in a muddy ditch and is rescued hours later by the no-nonsense lady police chief of nearby Maryfield, Officer Hanratty.

Hanratty, as inscrutable in her way as Carl, has a few skeletons in her own closet. In fact, all the townspeople with whom Jacob becomes reacquainted seem simultaneously the same as he remembers, yet strangely unfriendly and even secretive. Only the pretty new librarian, Adrienne, seems forthright and welcoming. Jacob strikes up a relationship with her, but the mysteries at the house where he grew up keep accumulating. Why do his father's toy soldiers keep appearing where they couldn't possibly be? From whence comes the snarling, vicious dog that tries to break into the house each night? Most unsettling, why does the deserted Logan homestead seem alive with sound and movement when Jacob is the sole occupant?

Dansky is not a completely polished writer--not yet. But there is something frank and refreshing in his narrative voice that I found appealing; the novel definitely does not read like a hundred others. Dansky's strength is in building suspense slowly and methodically. The most mundane and completely explicable of details, as they gradually pile up, contribute to a creeping and claustrophobic sense of dread. When Jenna, a tough, citified friend of Jacob's from Boston, is introduced toward the end of the book, Dansky reinforces his central theme: the tension between childhood and adulthood, between loyalty to home and family and the desire to break away and make our own way in the world.

I wish he had kept the story smaller and more intimate than it turns out to be in its final pages, but that is a common complaint of mine. Genre writers are always wanting to paint on a larger canvas in order to up the horror-story ante; my impulse is always that what is most personal is often most credible and, therefore, most horrific. No matter: Firefly Rain is, in the final analysis, an atmospheric page-turner of a ghost story that keeps some of its surprises until the very end. Give Richard Dansky's first novel a try--but don't be surprised if you never look at a firefly in quite the same way again.
Posted by Patricia Altner at 1:00 AM