Blog Tour and Contest for Jordan by Susan Kearney 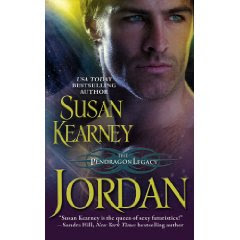 To celebrate the recent of release of JORDAN

, Susan Kearney relates some of the background for this book and the others in the Pendragon Legacy series.

[See contest details at the end of the essay.]


The Legend of King Arthur
I’ve often been asked what inspired me to turn the King Arthur legend into a futuristic romance trilogy.  But here’s the truth . . . I came up with a futuristic series I wanted to write, then looked for a legend from Earth’s history that would complement my story idea.

That might seems backwards to most people, but there are several reasons for why this happened.  First, I tend to think about the future first—not the past.  Second, I wanted to try something different with this series, something I hadn’t done before.  And third, I wanted new readers to try the series.

Now using a popular ancient legend to try and win over new readers might seem like a cold and calculated way of going about creating a story.  But if my books aren’t popular I can’t continue to sell them.  And actually finding new readers who are willing to spend their hard-earned dollars on a genre they’ve never heard of—is no easy task.

So I tried to make the ideas of dragon shifting more palatable to readers.  I want them to feel comfortable and a good way to do that is to put a new twist on a time-honored legend.  And King Arthur Pendragon was perfect—especially with his last name.  In addition, not much is really known about King Arthur, including the exact century he lived.  As a writer this was a great opportunity for me to twist the past and insert it into my story.

But in addition to all of the above, King Arthur’s time was known for chivalry, brave deeds, bold men.  Alpha men.  Those were great character traits for my heroes.  So I didn’t just use past historical legend, I built upon the characters of knights.

, I took a murky, quirky character from the past, Merlin, and remade him into my kind of hero.  Bold, determined, pure Alpha male.  His woman had to come from Earth’s future - not so far into the future, just enough so that space flight to other worlds might be believable.  Just enough so that we could have adapted to new DNA.  Just enough that Earth was different enough for my stories to work.

Will I use other legends in future books?  It’s possible.  Stay tuned . . .  In the meantime, you should know each of my books while connected stands alone. You won’t feel lost if you start with Jordan and work your way backwards.

there are excerpts at www.susankearney.com

This contest is open only to residents of the U.S. or Canada (No P.O. Boxes)


To be eligible do the following:

*Answer this question: What is your favorite character from the King Arthur legends?  (If you don't have a favorite pretend that you do and put down a name.)
1 point

*Link this post to your own site or a social network site, and be sure to let me know the URL.  1 point for each link.

*If you are a follower 1 point

*If you are an email subscriber 1 point

If your email is not associated with your ID, please put the address in your response.

I'm going to go with Lancalot. There is just something about him. He isn't King but he still manages to make an impact.

My favorite character is Gawain. Although I do have to admit, the cool thing about the Arthurian legends is how every author has a different spin on them. So not every author will necessarily write a version of Gawain I like. But many of them I do.

Susan Kearney has written a great series in "The Pendragon Legacy". I have the first two books, "Lucan" and "Rion", and I would love to win "Jordan"!

My favorite Camelot character is the King himself. Arthur was such a noble, conflicted, tragic and all-too-human man who became a king.

My favorite character is Lancalot.
I am a follower.
I am an email subscriber.

ditto what crystalgb said...
My favorite character is Lancalot.
I am a follower.
I am an email subscriber.

I'm a subscriber, I would also have to go with the majority and pick Lancelot! tWarner419@aol.com

My favorite character would be King Arthur.

I am a follower

It's Lancelot for me.

My favorite character is Merlin

My favorite character is Arthur

My favorite character from King Arthur has to be Merlin. I am big of magics.

I subscribed via email: srpnay2004[at]yahoo[dot]com

My favorite character is Lancelot.

I think my favorite character is Arthur, because most of the time it just seems like he has an awful lot of bad luck and overall is a good person.

No one picked Lady Guinevere - I have to go with her :)

My favorite is Merlin.

Lady Guinevere is my favorite then Lancalot..I love the stories so I will have to add this book to my to buy list.
Thanks for opportunity to enter.

What is your favorite character from the King Arthur legends? King Arthur is my fave, always!!
(1 point)

Have part of the series and have this on my to buy list would love to have a copy of Jordan, thanks for the drawing.

I would love to read this book. Sounds wonderful and great cover.

I would have to say Lancelot

I loved Lucan and Rion and look forward to reading Jordan.

My fave is Merlin

I am a follower

I am a subscriber

I always like Sir Gawain; especially the tale of Sir Gawain and the Green Knight.

I'd have to go with Merlin.

I have to say my favorite is King Arthur.

I'll have to say King Arthur is my favorite.
I'm a follower
I'm an e-mail subscriber
salvagin@verizon.net

Lady Guinevere she is my favorite. She had more than one man hoping to win her hand.

Please add my name to the contest.

I am a subscriber via email

Please enter me in the giveaway.

My favorite character from the King Arthur legend in Merlin.

King Arthur is my fav.

I am an email subscriber

I am a Follower on Google Freinds

My favorite character is Merlin.

My favorite character is the innocent bystander... just kidding. It depends on the version of King Arthur. With most versions my favorite is Tristan! Wonderful contest!

merlin of course
i dig magicians

my favorite is Lady Guinevere

My favourite character is Lancelot. He gets to do all kinds of great things.

I am a Google follower.

My favorite character is King Arthur. Who wouldn't want to be king.

I am an e-mail subscriber.

Q: What is your favorite character from the King Arthur legends?
A: Merlin!

My fave character is Merlin as I like a bit of magic in my books...and life for that matter!

I just became a follower also.

Put me down for Merlin. I love wizards with a sense of humor.

*Link this post to your own site or a social network site, and be sure to let me know the URL. 1 point for each link.