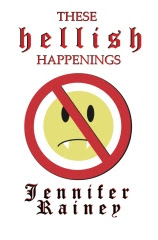 , has just been published.

Here is a brief blurb:


"In 1707, hapless vampire Jack Bentley made a pact with the Devil in order to escape a vampire hunt. Dealing with Satan seemed better than your standard angry mob at the time. But three centuries later, Satan is ready to collect His dues, whether the vampire likes it or not. He's taking Jack down to Hell, and He's even got a job picked out for him down below: an eternal position at the Registration Office of the Damned. Jack attempts to adjust to life on the Administrative Level of Hell where fire and brimstone have been replaced by board meetings and the occasional broken copier. But the whiny complaints of the recently-deceased are the least of his problems. Try adding to the equation a dead ex-lover, a dangerous attraction to his high-ranking demon companion, Alexander Ridner, and the sticky and distorted anti-vampire politics of a Hell that is surprisingly like our own world."

Jennifer is not only a terrific writer she also has a great sense of humor, as you'll see in her essay. [see contest details at the end of the post]

Take it away, Jen!

Count Dracula is My Garbage Man: A Look at the 'Everyday' Vampire
I was practically born surrounded by the bloodsucking undead. While I'd love to say that Dracula changed my diapers and Nosferatu played peek-a-boo with me, that is unfortunately not the case (though I did have a date with a certain fanged, number-obsessed puppet on television every morning). My mother has been interested in vampire literature, folklore and film for my entire life and longer, and so the vampire was just as much a part of my life growing up as perhaps softball games and school dances were for other kids.

No, the fanged ones never frightened me. In fact, I can remember a six-year-old version of myself (complete with bowl-cut and The Lion King bookbag) being terribly frustrated when my classmates did not know who Lestat de Lioncourt was. Surely, I reasoned, their mothers all loved him, too!

Patricia suggested that in this piece I speak about how vampires influenced me in writing my first novel, These Hellish Happenings. The easy answer might be that I wrote about them because I was always surrounded by them, making them an easy topic to grab. But there--fortunately--is more to it than all that.

I have always fancied the vampire to some degree. Werewolves were far too hairy and temperamental, and most zombies just didn't have the necessary cognitive capacity. But when I compared my interest in vampires to the interest in the undead of my peers, it appeared I was, well... doing it wrong.

Many high school girls go through a vampire phase. My teenage associates certainly did, and I was intrigued, as well. I mean, who doesn't love a romantic, powerful figure who lures folks into a sexual stupor, drinks their blood and offers them immortality, right? Who doesn't love the sexy vamp with piercing eyes and a dramatic, dangerous past?

Rather, what interested me was the vampire's problem and how it might realistically affect typical, everyday life. Human life. I wanted bloodsuckers that were just like normal people, dealing with personal struggles brought about by vampirism, looking to function in human society. I didn't want my vampires lovelorn or ideal. I wasn't looking for sensuous vampire queens or bombastic brat princes, British, bleach-blond bad-asses or lavender-eye lidded dreamboats.

After all, if vampires really existed, what are the chances they'd all be tall, dark and handsome, anyway? I was happier with an average guy who works as a gas station manager figuring out the ropes of vampire life or with an awkward librarian who is ashamed that she has to raid the blood bank once a week.

This was what inspired much of  These Hellish Happenings. The novel focuses on the hapless and somewhat pathetic vampire Jack Bentley who, due to some shady dealings with Satan, is carted off to work at Hell's Registration Office for all eternity (in an environment that's more Office Space than Dante, no less). Throughout much of the book, there are other characters who discriminate against Jack, mocking him and treating him differently because he's a vampire.

While the novel is predominantly a comedy, it comments on the seriousness of discrimination and human rights in reality through others' treatment of Jack. A big inspiration for me was the concept of a vampire trying to overcome the kind of discrimination that a human might face in the workplace, in everyday life. My aim was to make his challenges ones to which the reader could relate, that felt relevant to our society.

Certainly the stigma and negative effects of vampirism on the vampire have entered into the culture for years now; one need look no further than Anne Rice's tormented Louis to see this. However, many television shows, movies and books today are paying more and more attention to the problems of vampires having to function in everyday life. No longer must they function purely as outcasts on the fringe of society struggling with their condition, but now they must function within society itself, surrounded by humans with which they must interact (whether the humans are aware of the existence of vampires or not). The BBC program Being Human

, for example, examines this closely as it follows a vampire, ghost and werewolf who try to live normal lives within human society. Their problems, though they stem from their species or condition, are very human, so that they are no longer awe-inspiring, larger-than-life supernatural beings, but very relatable and realistic characters.

I can honestly say that I hope this trend continues. Now, I'm not saying that we defang vampires and domesticate all of them. The vicious killing machine of 30 Days of Night

and the beautiful and philosophical vamp of Anne Rice novels certainly have their merits. But I rather like the "everyday vampire," as he might be called. The idea that the homely bus driver that greets me every evening might be forced to hide a blood addiction for fear of losing his job is intriguing, appealing--and not in terms of sex appeal.

But for the record, Nosferatu is the sexiest vampire. Gotta love those rat teeth.

NOTE: Jennifer comes by her writing talent honestly. He mom Sandy Rainey posts insightful reviews for PVN when she can take time from teaching duties.
Posted by Patricia Altner at 1:00 AM

Adding it to my TBR as well. Sounds like a great read. It's nice to see a fresh approach and comedy added to the paranormal reads currently available. The

Thanks so much for taking an interest in the book; I hope you enjoy it!

This sounds pretty good; I look forward in reading it.

Sounds like a lot of fun, ladies! Patricia, I'm dropping in to say thanks for the e-mail. I've got this posted at Win a Book for you.