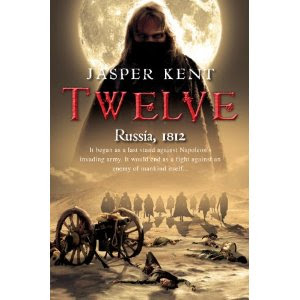 The year is 1812 and Napoleon Bonaparte has marched eastward and entered the boundaries of Russia. The Tsar's army, no match for the French, continues to pull back leaving scorched earth in their wake. Despite the setbacks none believe Bonaparte will ever capture Moscow but his troops move forward relentlessly and eventually take the city.

A small group of Russian intelligence officers band together with the goal of working behind French lines causing enough havoc to at least slow down the enemy. One of them, Dmitri, has called in reinforcements - 12 steely-eyed mercenaries from Wallachia. He is certain they will help turn around the fortunes of Russia. Dmitri assures his friends that these cold, menacing dozen can be trusted. The narrator Aleksei Ivanovich Danilov, has deep reservations. He and his comrades dub the menacing 12 the Oprichniki - a name given to the special army of16th century Tsar Ivan the Terrible - created specifically to destroy anyone Ivan considered a threat.

Alexei's reservations prove correct. The creatures turn out to be the dreaded voordalak, - thought to be mythical - they are instead merciless members of the real world. They are vampires, and not the romantic sort. They suck the blood and eat the meat of their prey. Their constant hunger and lack of conscience make them efficient killing machines.

This gripping saga is as much historical drama as horror story. Kent convincingly portrays the difficult life of the soldiers and the terror faced by civilians in occupied territory. Starvation for each was a constant companion. In Twelve

there are mysterious deaths and disappearances  which are shrugged off as some sort of plague. No one except Alexei, and eventually his comrades, suspect the true horror behind the loss of life. I would not categorize Twelve

Note: This novel is not for the squeamish. There are several scenes of torture and murder that leave little to the imagination.

[This book was sent to me by the publisher. My thanks]
Posted by Patricia Altner at 1:05 AM

I certainly enjoyed Twelve. I love vampires and Russian history and this was a good combination of the two.

If you have a chance to read it let me know what you think.

Looked on the Wanton Wantin' Book List and, yep, TWELVE is there. Looks like it's been there for a bit, it's highlighted and has three stars next to it.....time to bump it up and do some Christmas shopping for myself.