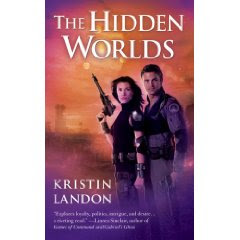 I rarely review any genre outside the paranormal, but I am going to make an exception with the The Hidden Worlds trilogy by Kristin Landon. I had seen positive references to it on a few other blog sites. Looked quite interesting. I thought I would read it when I needed a break from all things paranormal. At the time there was no thought to writing a review. That changed when, for no reason I can explain, the publisher sent me a copy of The Dark Reaches

(Book 3), the final installment in the series. First thing was to buy The Cold Minds

(Book 2), and The Hidden Worlds

(Book 1). To understand and enjoy Landon's work the books should be read in order.

The stories mesh together so tightly that I won't even attempt to review each one lest any spoilers pop up. Here is the bare outline. 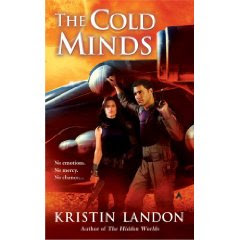 Alien machines called the Cold Minds have invaded Earth and its solar system. They kill swiftly and without mercy. Much of humanity manages to escape by taking all available ships through other space, a dimension that allows travel through great galactic distances. The heroes are the jump pilots. They are the only ones who can safely maneuver other space. In this way most of humanity escapes. They now live in colonies on the Hidden Worlds.

Ian sen Paolo  is one of the elite. He is a jump pilot who lives with those of his kind on the planet Nexus. It is assumed that the members of this exclusive male group are the only ones capable of piloting a ship. The ruling council allows only certain of their pilots to procreate. Only sons are born to them, and the women who bear the children are carefully selected and well paid. They are surrogate mothers who will never see their children again. Pilots consider themselves superior to other humans and, because of their unique gift, that's how they are treated. 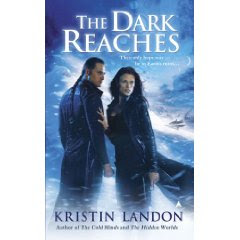 Linnea Kiaho comes from one of the poor outer planets. In a desperate move to get money for her family she travels to Nexus carrying with her a secret that could destroy the privileged position of Ian's family, and perhaps the exclusive status of all jump pilots. When she first arrives on Nexus Linnea works as Ian's servant. He is the typically arrogant pilot, but then his world suddenly collapses. Linnea, who knows his secret, is caught with him in the same trap. Out of necessity they learn to lean on each other and from this their love does develop - not easily and not smoothly. There are no hearts and flowers for their romance.

Landon's powerful writing puts you deep into the mind of each character. The reader experiences their joy or pain as if each moment reader and character are one. Landon's imagination has created a vivid universe with gritty realism. Life can be very harsh either because of the physical surroundings or the brutal political power games. The story is so gripping and the characters so lifelike that reading becomes almost an addiction. You desperately want to know what happens next; yet you don't want the story to end.

oh, I like the sound of this author's voice in how you described it. I like to really get into the psyche of a character, makes the emotions give all the more impact. I'm off exploring this series some book at Book Dep. Store ;)

Hi...thanks for the recommendation. I love paranormal romance, but I like sci/fi futuristic romance as well. I've added this to the acquisitions list to give it a try. Thanks again..

I was captivated from word one in book one!

I would like to hear your take on the series.

Although I lean more towards fantasy than SF, these books sounds interesting enough that I think I'll give them a try. Great review!

I really wanted to get across the excellence of this series. Sometimes I'm not sure if I do it justice.

If you do read the series or one book please stop back and let me know your opinion.