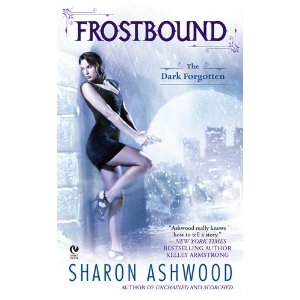 In the Urban Fantasy genre brimming with tales of kick butt heroines, Sharon Ashwood has managed to create something unique with the Dark Forgotten series. Yes, her heroines know how to strongly motivate others, but so do her heroes. Each book has a paranormal hero and heroine but never the same main characters twice. Primary characters become secondary in succeeding stories which means each book can stand on its own, but, as with most series, you get a better taste of the author's imaginary world and its populace by reading the novels in order.

Lore is the Alpha male leader of the Hellhounds. These half demon creatures bred to protect and serve can assume the hound or human form. They also have another special trait. It is impossible for any one of them to tell a lie. To help out in tight conversational situations Lore has learned the art of dissembling.

To insure good behavior on the part of the nonhuman population of Fairview, aka supernatural central the handsome vampire Alesandro Caravelli (Ravenous) was named sheriff. Now, however, Lore has been temporarily deputized to take Alesandro's place while he, his witchy wife Holly, and their baby daughter take a much needed vacation. Naturally this is the time when anything that can go wrong does. A freak snowstorm hits town closing all the roads; tensions are already high because for the first time a nonhuman (in this case a vampire) is running in the municipal elections; worst of all is the appearance of a necromancer who has used a blood sacrifice to carry out his malevolent plan.

A beautiful, young (human) woman who lives in Lore's building is brutally murdered by decapitation. The main suspect is Talia Rostova, the woman's look-alike cousin who happens to be a vampire. To prove her innocence Talia reluctantly agrees to accept Lore's help in tracking down the killer. But she also keeps from him a dark secret from her past that might be linked to the killing.

Magic plays an important part in many of the strange manifestations (even for the supernaturally charged town of Fairview) that occur.

Lore and Talia have an immediate attraction for each other although neither wants to admit it. Soon enough in the midst of solving a tangled mystery they fall in love. There aren't a lot of bedroom scenarios in Ashwood's books, but those that appear definitely sizzle. The lovemaking between Lore and Talia is no exception.

Frostbound is a wonderful blend of adventure, mystery and romance. I have enjoyed all the books in the Dark Forgotten series. I truly hope there will be many more.

[This book was sent to me by the author. Thank you, Sharon]
Posted by Patricia Altner at 1:00 AM

Patricia I have truly enjoyed the stories in the Dark Forgotten series more than I thought I would, this one though is sounding like it will be my favorite... I loved Lore and am so glad he got his own book/story and thanks for the review that gave us a little glimpse into what happens... It just makes it that much harder for me to wait on my book to come in the mail when it releases!

This book really does Lore justice. How can you not love a hellhound?

Hope you enjoy it. Let me know!

Frostbound is terrific as are all the books in the series.