[see contest information at the end of the interview] 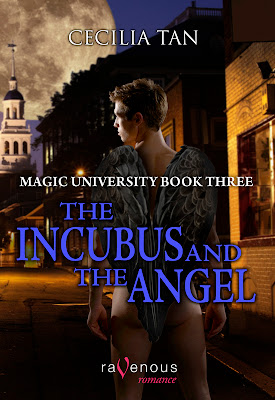 In the Land of Dreams: Incubi in Magic University
by Cecilia Tan
I was always told in fiction-writing classes that a dream sequence was somehow "cheating." Then again these are the same writing classes that told me not to write fantasy or science fiction at all. I have always loved dream sequences and have always wanted to put my characters into lucid dreams. I started playing with this a little in MIND GAMES

Imagine my thrill then, on seeing the movie INCEPTION

, in which the
main action of the movie takes place inside dreams! When I saw the
film, I had already turned in the manuscript of my latest paranormal
romance (now in ebook from Ravenous with a Red Silk paperback due next
year), The Incubus and the Angel

, and I thought, "surely if this film
can succeed so brilliantly with so much taking place in dreams, then
surely my novel will be OK!"

I had been worried that maybe too many scenes took place in the dream
world, but now I think readers will indulge in it just fine.

The Magic University books (The Incubus and the Angel

is the third in
the series) take place at the hidden arcane arts college on the
Harvard campus. In my world, magical creatures being spoken of in
myths and legends are usually real, but not always in the way that
mundane folk think. For example, there are no vampires in my world,
but there are magicians who can train themselves to live very long
lives on a single drop of blood per month if they forego having sex.

I hope everyone who reads the book has sweet dreams afterward.

Print Book buy links:
Mind Games
The Siren and the Sword
The Tower and the Tears


Ebook buy links:
Mind Games
The Siren and the Sword
The Tower and the Tears
The Incubus and the Angel


CONTEST
One lucky winner will receive an ebook copy of one book (winner's choice) from Cecilia's Magic Universe series.
To enter the contest answer this question: Do you believe in lucid dreaming?
Be sure I have access to your email.

I actually don't believe in lucid dreaming. I think that we can train ourselves to remember our dreams, but I don't think that dreams are ever an expression of consciousness. They are just random thoughts that our brains put together when we are asleep.

I believe in lucid dreaming. I also think we can train ourself to remember our dreams. I do believe our dreams are expressions of our consciousness and that they are not just random dreams. I think also they can be triggered if we are worried about something or if we have something on our minds. Please enter me in contest. Tore923@aol.com

i believe in lucid dreaming. i'm pretty sure that it's happened to me when i'm just waking up. i sometimes feel as if i can control the dream, although it doesn't always end the way i want it too... LOL!

Great giveaway! I'd love to be entered.

No. I don't believe in lucid dreaming. It never happened to me.

Please count me in. Thanks.

I don't believe in lucid dreaming. I'm lucky if I remember bits of a dream when I wake up.

Interestingly, the other animal that has EEG waves pretty much identical to humans is cats!

Not surprisingly, those who have lucid dreams believe in them, while those who don't have lucid dreams, don't believe they exist. It's not a state of consciousness you can imagine if you haven't felt it yourself, I think, but so many people report experiencing it that the existence of the phenomenon really isn't in dispute.

It remains a mystery however, whether cats have lucid dreams. Until they learn to speak, we may never know. ;-)

Just popping by to let you know this is posted on win a book!

I absolutely 100% believe in lucid dreaming. There have been many dreams where I've realized I'm dreaming. Once, while having a particularly scary nightmare, I told myself in the dream to wake up. I don't think lucid dreaming is actually uncommon. It's sure interesting stuff to talk about though. *thumbs up*

I believe in lucid dreaming. I don't think they are just random dreams.

I have only rarely had very very lucid dreams--as opposed to regularly intense dreams. And I have attempted to have lucid dreams
with mixed results. And I use dreams in my fiction as a way for my characters to realize something that they can't access in their waking state. The dreams also reveal the characters fears/long-ings. I've always found dreams and
their analysys quite interesting.

Dreams can definitely be influenced by our thoughts and actions during the day, but most actual dreams occur in such deep REM sleep that to put conscious influence on it would be almost impossible.
baileythebookworm[at]gmail.com

Def have lucid dreams. I think some people are just more receptive/perceptive.

At this point I'm not really sure if I believe in lucid dreaming or not. I'd never heard of the term until a couple months ago when my son mentioned it to me. I think, though, that there may really be something to this lucid dreaming thing.
I would love to be entered in your draw.
wandanamgreb(at)gmail(dot)com

Yes I believe in lucid dreaming and I think almost every dream has a deeper meaning.