The Girls with Games of Blood - Vampire Book Review 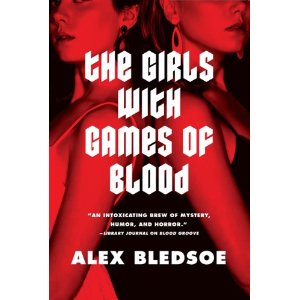 The Girls with Games of Blood

The vampire Baron Rudolf Zbinski walks the streets of 1975 Memphis, TN. He awoke there a short time ago and has had time to find others of his kind. Two of them still follow him. There had ben no one to teach them the powers of being a vampire nor how to exist as one of the undead. No need to stay away from the sun. It doesn't kill only diminishes powers; no need to kill victim, better to nurture a long term commitment.

Not that Rudy is a creature with a finely honed conscience. In fact he coldly calculates all his actions, doing whatever necessary to what he needs or wants.

He has an agreement with the two other vampires. They teach him about life in the modern world and he will show them how to more easily survive as a vampire. He had been unavoidably absent from the world for the last 60 years after being staked - but not destroyed - by a vampire hunter.

It turns out that the Memphis area has new blood, so to speak. Sisters Patience and Prudence make their appearance. No love lost here. They have been involved in a bitter feud for more than a century. Unfortunately Fauvete, a follower and favorite of Rudy's, becomes friendly with Patience which catches the eye and the fury of Prudence. This along with other complications threaten to destroy Rudy's carefully constructed world.

Written with a wild concoction of dark humor and horror, Bledsoe has come up with a fabulous sequel to the equally compelling prequel Blood Groove

. The ending of Games of Blood

leaves no doubt there will be another book. I look forward to it!

Review of Blood Groove.
Posted by Patricia Altner at 1:00 AM

Interestingly, I'll be doing a review of Blood Groove on my website this Friday. Looking forward to the new book (which I had hoped was on its way. Rudy is too good to be a one book wonder.) I'll put it on my "to Review" list, too.

Rudy is still doing his thing in book 2. He is such an interesting character!