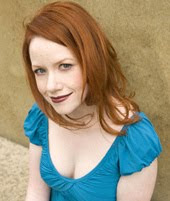 PVN is happy to be a part of Richelle's Vampire Academy blog tour to celebrate the publication of the most recent book Blood Promise.  Below you'll find a brief synopsis of the series as well as the book followed by a Q and A.

"Two races of vampires walk our world. The Moroi are alive and wield elemental magical, while the Strigoi are undead and evil--feeding on the innocent to survive. Rose Hathaway--a half-vampire with poor impulse control--is training to be a bodyguard for a Moroi princess. Learning to decapitate and stake is hard enough, but Rose's real danger may lie in an illicit romance with one of her instructors..." 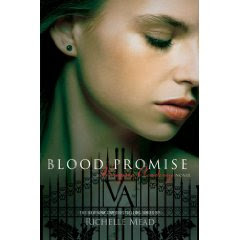 Rose Hathaway's life will never be the same.

The recent attack on St. Vladimir's Academy devastated the entire Moroi world. Many are dead. And, for the few victims carried off by Strigoi, their fates are even worse. A rare tattoo now adorns Rose's neck, a mark that says she's killed far too many Strigoi to count. But only one victim matters . . . Dimitri Belikov. Rose must now choose one of two very different paths: honoring her life's vow to protect Lissa—her best friend and the last surviving Dragomir princess—or, dropping out of the Academy to strike out on her own and hunt down the man she loves. She'll have to go to the ends of the earth to find Dimitri and keep the promise he begged her to make. But the question is, when the time comes, will he want to be saved?

Now, with everything at stake—and worlds away from St. Vladimir's and her unguarded, vulnerable, and newly rebellious best friend—can Rose find the strength to destroy Dimitri? Or, will she sacrifice herself for a chance at eternal love?

PVN: Would you describe the characteristics of your vampires - the Moroi and the Strigoi?

Richelle: Moroi and Strigoi both come from Romanian mythology. Moroi are living, and Strigoi are dead. I've embellished their histories a little, and in my series, Moroi are good and wield elemental magic.  They don’t have to kill for their blood, whereas Strigoi are evil and prey on others.

Richelle: I work at home, in an office with mauve walls.  My day is usually broken into segments of errands, working out, writing, etc.  There’s no hard schedule to it, though my writing increments are usually no more than 2-3 hours at a time.  This is both because that’s about how long it takes me to do a chapter and because my hands need the rest (according to physical therapists).  So, in a given day, I may get up and eat, write, go to the gym, answer email, write, eat lunch, etc.

PVN: Which books or authors have most influenced your writing?

Richelle: Growing up, my favorite books were the Dragonlance series by Margaret Weis and Tracy Hickman. They influenced me a lot in that I believe strong, well-developed characters are the most important part of a book (even though you ideally want all parts to be good!). Those books also taught me not to be afraid to do shocking things in the middle of a series--as shown in Shadow Kiss

, the third book in the Vampire Academy series.

Another favorite book is The Mists of Avalon by Marion Zimmer Bradley. This always comes as a surprise to some readers, mostly because they’ve never heard of it. Also, there are no vampires in it at all. It’s a semi-historical novel, based on the myths of King Arthur and told through the women—who are portrayed as very strong—in those tales. It’s a massive book, and I first read it when I was fourteen. It totally opened up my eyes to the world and gave me a huge appreciation for Celtic culture, as well as insight into spirituality and religion. Every few years or so, I pick it up again and re-read it.

Note:  This is the first book in the series that I have read (full disclosure, thanks to the publisher). Of course I knew about the books, even bought the first two, but never got around to reading any in the series until now. I honestly liked Blood Promise and will post a review soon.

If any reader has an opinion on this series I would love to hear from you!
Posted by Patricia Altner at 1:00 AM

Hi :)
Thanks for having one of the best writers ever here & thanks to Richelle for sharing. I enjoyed learning a bit more about her & her writing. I love how her vampires become evil! Such great characters. The dynamic between mother and daughter is so realistic too.
All the best,
RKCharron
xoxo

I love the series! It was recommended to me by some friends I talk to online. I was blown away at how great the storyline was for YA. It wasn't overly teenie bopper, it was fantastic! Rose is a relate-able character, she has flaws, but it works for her. Things aren't always perfect for her so her world--even with vampires--seems real. I can't wait for Spirit Bound!

love, love, love this series and blood promise was amazing! richelle mead is a fabulous author, she keeps me wanting more. keep up the wonderful work richelle and thanks for the interview! your fan, tina

I really don't have an opinion yet on this series other than I really need to read soon. I've read so many good reviews on this series. :)

Thanks everyone for your comments!

Blood Promise focuses on Rose's hunt for Dimitri which means a trip to Russia. When she finds him what will she do? What kind of person is he now?

Jumping into the middle of a series isn't easy, but there was enough background so that I had a pretty good idea of what came before. Not all my questions were answered, but I found this book so engrossing I have to at least read the previous Shadow Kiss.

I have read two books in Richelle's other two series, Dark Swan and Succubus, but not read any in the Vampire Academy yet. That will soon be remedied, just not sure when.

Recently a bookseller at B&N recommended Succubus Blues because Mead captured the life of the bookseller so well and other stuff too, of course ;)

So now I have a new series to begin.
Looking forward to it.