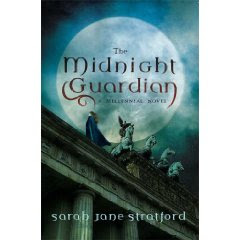 [Read an interview with the author]

The story is told from the viewpoint of the vampires who live in their own complex society. They recognize what they are - predators with humans as their source of food. History has shown that human warfare brings harm to vampires as well. Too much mortal carnage can cause famine amongst the undead, even leading to vampire killing vampire.

In Germany Hitler has seized power and another European war is brewing. Besides dreading the devastation human conflict can bring,  Vampires have a deep hatred for Hitler and his minions.  They are viewed as monsters whose main agenda is to rid the world of undesirables - Jews, communists, homosexuals, Roma, the mentally handicapped, and vampires. Nazis know the undead exist and have trained a group called Nachtspeere - Night Speers -  who know the techniques needed to destroy the them.

The Millennial vampires (those who have survived at least 1,000 years)  of England launch a plan to stop the Nazis before they can overpower the Continent. The blond, beautiful Brigit and three other millennials arrive in Germany in 1938 ready to stop the Nazis from their evil quest to conquer Europe and impose their warped beliefs on a vulnerable world. They are to infiltrate the government, become close to those in high places, learn their plans and sabotage them.

In another time line it is 1940 Brigit is on the Berlin-Basel train. Although a powerful vampire she is vulnerable and must move carefully and never let down her guard in front of those who might sense what she is. Her only mental safe harbor comes with thoughts of her lover Eamon who waits for her in London.

When the story focuses on Brigit and the others in Germany the pace never slackens. You feel their fear when being stalked, the nervousness when infiltrating the enemy ranks, and the exhilaration when destroying the enemy in the horrible way only an infuriated vampire can do. An important subplot is the romance between Brigit and  Eamon. Brigit and her lover have a deep connection that goes beyond what most couples - mortal or immortal -  could ever imagine. Although their history is engrossing it does not have the same riveting intensity of the main story.

Midnight Guardian with its mixture of intrigue, romance, and well wrought characters kept my attention from beginning to end, and I look forward to the sequel.

[Dear FTC, The publisher was kind enough to send me an ARC of this novel. I'm really glad they did.]
Posted by Patricia Altner at 1:00 AM

Currently half way through the book I can add that I find it very well written, and most of the German bits are right (which is not so usual in books written by American writers, especially in this genre - Laurel K Hamilton comes to mind, who gives Germans Swedish names...)

Some errors are there, it's not very probable that almost no-one leaves a train in Stuttgart, which is (and was in 1940), after all a major city...things like that. But that's mere details.

Last, I am not so sure if I like the frequent "time hopping" very much, but that's merely about taste I guess.

Well worth a read so far anyway!

Wow. I will def be picking up this book. I love WWII fiction and Alt Fiction. This has moved to number two on my reading list, after Boneshakers.

I agree I thought the book was well researched. The time hopping took a bit getting used to but after a while it didn't bother me.

Hope you like the 2nd half of the book as well as the first!

Boneshaker. Is that the steam punk novel by Cherie Priest?

I have seen this book mentioned quite a few places. Read your review and now I have to get it. Thanks Patricia.

Good to hear from you!