Once Bitten by Kalayna Price - Review 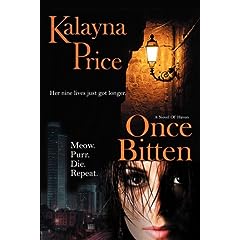 On the run from the hunters of her father's world which lies beyond the portal, Kita almost losses her life in the town of Haven. When she regains consciousness she realize that she can no longer summon the power that allows her to shift into her other form - that of a kitten. It seems the vampire Nathanial had found her in trouble and saved her. However, in order to do that, he had to give her some of his own blood. So now she has joined the ranks of the undead which has, at least temporarily, affected her shifter abilities.

As if that weren't enough a man magically appears, declares himself a judge come to sentence her to death for having created the rogue shifter guilty of several killings in the human world. Kita protests her innocence to no avail. Fortunately Nathanial convinces the judge to give Kita 2 days to find the rogue. If she doesn't complete her task, then her life is forfeit. Kita's time in Haven has gone from one horror to another.

Two others help her in the search for the rogue - Bobby, also a shifter and Kita's childhood friend; and Gil a rotund lady who is a mage and a scholar. The four turn out to be quite a formidable team, when not squabbling with one another that is.

Each urban fantasy writer brings a twist of their own. Kalayna creates a dark world peopled by characters with quirky charm. Kita, a runaway from the land of Firth, has problems with her father and his future plans for her. She barely survives in the human world and must always be alert for the shifter/hunters. She's a young gal burdened with a lot of baggage, and her problems aren't helped by having to learn the vagaries of being a vampire plus facing judgment day for a crime she did not commit. Still the smart, resilient Kita is fun to watch as are Nathanial, Bobby, and most certainly Gil, a rather eccentric lady whose actions lend humor to the story. Once Bitten

is imaginative, thoroughly entertaining, and easily keeps a reader's attention.
Posted by Patricia Altner at 12:55 AM

I do agree with you, that this is definately a new twist on the Vampi Genre - sounds exciting and really grabs me.

This one wont settle long on my TBR list.

It's fun to discover new authors.