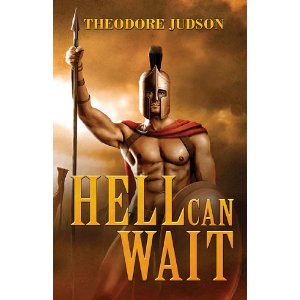 Have you ever wondered what happened to Maternus, a Roman soldier who led a failed rebellion against the Emperor Commodus in 186 AD? (Russel Crowe comes later) Well, neither have I, but fortunately for readers Theodore Judson did  and has written a brilliant, humorous fantasy about the bonds of friendship and the eternal nature of love.

Maternus has literally gone through Hell. A bureaucratic screw up kept him in this most undesirable place for close to 2,000 years. Eventually the mistake was caught, and Matt finds himself in the 21st Century where Mr Worthy, an angel, has decided that even though Matt was a thuggish, brutal Roman soldier he had also shown qualities of decency - like sparing the innocent and feeling a special love for a saucy young lady. It's therefore possible, says Mr. Worthy that Matt can earn redemption. The demon adversary Mr Banewell, not wishing to lose a resident, challenges this assumption. With some acrimony the two finally agree that Matt must pass three tests before entering the pearly gates.

As for locale these are the parameters:
"He has to be among the unfamiliar, in some nation that could not have existed in his lifetime. There have to be independent women who are able to stand up to him, and lots of bothersome children to distress him. Put him in an affluent place, somewhere that would not know or pardon his type of violence.”

To help Maternus (now known as Matthew August) make his way in this new world he is given the gift of literacy, however, his references are still to the 2nd century. Thus Mr. Worthy shows him a building with a cross on it and Matt assumes it must be a place of execution. While applying for a job as janitor at a middle school he is asked about previous employment. Matt answers honestly that he was in the army.  His numerous scars attest to combat. Where did he fight?. Mesopotamia he answers and his educated audience nod in understanding. Matt is surprised to discover that war still rages in the area.

Because of his strange mannerisms and odd way of speaking Mr Worthy advices him, if asked, to say he is from Montana. This works.

It's tough going at times but Matt, with the help of a library card, educates himself, by reading all the great books. He even makes friends which is a new concept for him. These friends unwittingly help him with the difficult tasks assigned by his supernatural watchers.

This was a thoroughly delightful book that believably portrays Matt's fish-out-of-water experience in a modern day American suburb. Judson gets everything exactly right. I can't recommend this book highly enough.

[This book was sent to me by the publisher. Thank you!]
Posted by Patricia Altner at 1:00 AM

I'm convinced; I just added this to my shopping cart.

I can't wait to read this one. Thanks for the heads-up.

Thanks for writing! Hope you enjoy Hell Can Wait. Let me know.

This sounds like my kind of book. Thanks for the review.

So good to hear from you, Maria. I just reread your ghost story Scent of Roses and enjoyed it all over again.
Such a beautiful romance.

Oh My, I just finished Hell Can Wait. I loved it!! I tried finding Judson online but can't track him down. Wow! great book!

Thanks for letting me know how much you enjoyed this book! I haven't had any direct contact with the author, but I will pass your comment along to the publicist at Edge.